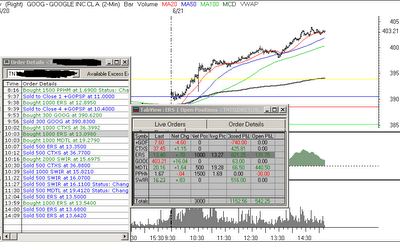 This is in response to the not nice person who anonymously wrote to me questioning how “dumb could you be to own puts on GOOG before it began a 15 point rally”.

“It is okay to be wrong, but a sin to stay wrong”. I’m not sure who gets credit for that saying, but my trade in the GOOG puts is a prime example of that saying. Yesterday I outlined why I thought GOOG had the potential for a large drop and as a result I purchased put options. I bought five of the GOOG July 380 puts for 11.60 on Tuesday and was feeling pretty good about them last night as they closed at 12.20. This morning GOOG gapped higher by 4 points and my puts had dropped to 11.00. Of course I was annoyed, but knew I had to take action. After realizing that the stock was looking very strong I offered out my puts at 11.00, but only got filled on one of them before the stock resumed its upward movement, which resulted in an implosion in the bid of my puts. I quickly cancelled my order to sell the 4 remaining contracts at 11.00 and sold them to the bid at 10.40. When I was done with the trade I realized a loss of 1.10/ contract or a total of $550. Not a bad loss considering the stock was up by over 4 points and if I had held my paper loss would be over $2,000 based on the current $7.50 bid for those options. By quickly taking action and admitting I was wrong, I was able to free my mind of the bad trade and focus on other setups in the market. That is the trade, I lost money. That is the life of a trader, you have winning trades, and you have losing trades. I will never claim to have only the winning type. I believe a large difference between a professional and an amateur is how you handle losers. I hate losing money, so I sell my losers quickly and then move on to the next trade. The anonymous emailer may still be in these puts, I hope not. As I always stress here, the market is risky, our jobs is to control risk and exploit an edge when we can find it. Also remember, I am not giving trading or investing advice here, I am merely pointing out ideas I see where I believe there is an opportunity to make money. I do not expect you to share your profits if you find a good idea here and I do not expect to hear any whining if you lose money on a stock I mention. Once you make the decision to buy or sell a stock, it is your decision and you must live with it.

By the way, 99% of all the emails I get are positive, but one jerk occasionally puts me in a foul mood.