From October 15 to July 15, the average price (based on volume or VWAP) shares of PALM traded at was approximately 6.94. Looking at the large short position (over 40 million shares as of July 15) and the fact that the stock is now above 7.20, it would be easy to jump to the conclusion that the stock was a good short squeeze candidate. A closer examination of the short interest data (table below) reveals a different story. 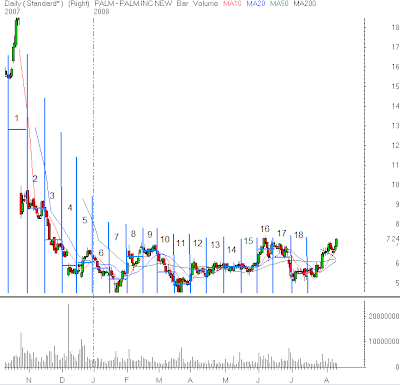 The table below shows the growing short interest in shares of PALM. Here is how to interpret the data. As of Oct 31, the total short position in PALM was 25.6 million shares, that was up 4.9 million shares from October 15. The Volume Weighted Average Price (VWAP) between 10/15 and 10/31 was $12.82, that means we can approximate that close to 5 million shares were shorted at an average price of 12.82, of course we do not know the true price the shorts got involved, but the VWAP gives us a good approximation. For period two, the shorts added another 9.3 million shares at an average price of 8.84.

When we average the two periods (9.3×8.84) + (4.9×12.82)/ 14.2 we find the average price the stock traded while 14.2 million shares were added was 9.79. If you add the 20.7 million shares which were short before the large breakdown in October, you can quickly see that of the 40.8 million share short position, only about 5 million shares (or about 12% of the position may be in a losing position. Without digging past some of the numbers it would be easy to confuse this stock with one where the short sellers may be squeezed. The point here is that, on balance, the short sellers are well positioned in this stock and that makes it less likely that a squeeze rally would develop.

The stock looks interesting from the long side right now, but what do the shorts know about PALM? Short sellers can be very patient and they are often right. 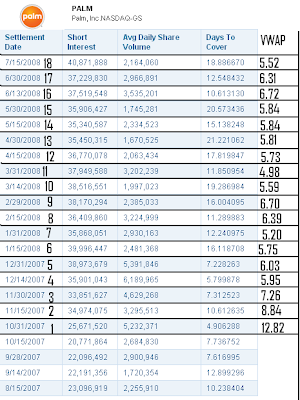 You can learn more about short squeezes and VWAP in my book.