Making trading profits is not about forcing your opinion on the market, but to listen objectively to the message of the market in order to uncover and exploit low risk, high potential opportunities as they are presented. I do not have a grand theme for 2008, to me a guess as to where the market will finish one year from today is irrelevent. My goal each day is to seek out the low risk opportunities and cut losses quickly if the market does not agree with my analysis, or ride the winner for the bulk of the short term move. Is anyone who predicted the SPY would be up 4% in 2007 actually claiming they were smart? There were at least fifteen occasions where the market showed a rally or decline of at least 4% in 2007. The volatility rewarded disciplined traders the most this year and next year is anyones guess again. I choose to focus on finding the trades where I can make money and that will be my game plan for 2008. It is the same approach which has served me well for the last fifteen years of trading. I hope that 2008 is a great year for you in everything that is important to you, not just your trading success. 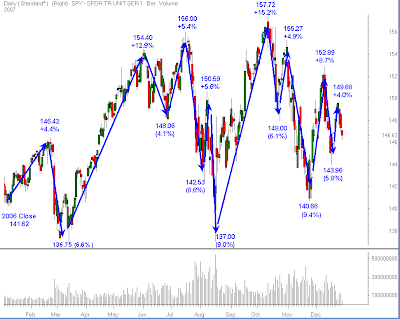