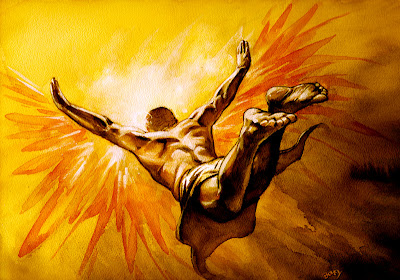 Icarus (Greek: Ἴκαρος, Latin: Íkaros, Etruscan: Vicare) is a character in Greek Mythology. Icarus’s father, Daedalus attempted to escape his prison, the Labyrinth, in which he was imprisoned at the hands of King Minos, the king for whom he had built the Labyrinth (Labyrinth is derived from the Minoans word for a ceremonial axe). The Labyrinth’s origninal purpose was intended to hold the horrible creature, the Minotaur, a beast that was a product of one of the King’s mistress’s affairs with a bull. Daedalus fashioned a pair of wings for himself and his son, made of feathers and wax. Before they took off from the prison, Daedalus warned his son not to fly too close to the sun, as the wax would melt, nor too close to the sea, as the wax would dampen. Overcome by the sublime feeling that flying gave him, Icarus soared through the sky joyfully, but in the process came too close to the sun, which melted his wings. Icarus kept flapping his wings but soon realized that he had no feathers left and that he was only flapping his bare arms. And so, Icarus fell into the sea in the area which bears his name, the Icarian Sea near Icaria, an island southwest of Samos.[1] His flight was routinely alluded to by Greek poets in passing, but was told in a nutshell in Pseudo-Apollodorus, (Epitome of the Biblioteca) (i.11 and ii.6.3). Latin poets read the myth more philosophically, often linking Icarus analogically to artists.[2][3] In the fifteenth century Ovid became the source for the myth as it was rediscovered and transformed as a vehicle for heroic audacity and the poet’s own aspirations, by Renaissance poets like Jacopo Sannazaro and Ariosto, as well as in Spain.[4] From WIKIPEDIA