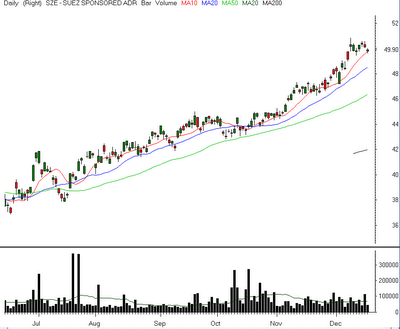 Today on WallStrip the featured company is Suez SA (ADR) (Public, NYSE:SZE) and even though I knew I wouldn’t trade the stock I watched the episode hoping there would be something that makes me laugh. Today’s show wasn’t funny but something clicked for me as I watched. The humor of the show is good, but I’m involved in the markets to make money and knowing what a company does and the catalysts behind its growth is the type information which allows us to have the confidence to hold on for longer periods of time (only, of course, if the trend remains intact).

I wish that there was a short video for every company listed in Google or Yahoo Finance (give them a call, Howard). They could be short videos paid for by the company which are meant as a short overview of what the company does, this could be a huge opportunity for a young company like Wallstrip to find big Wall Street revenues.

I don’t like trading ADRs because the stocks trade on the primary exchange of their home country first then prices have to be adjusted for the time that markets open on the NYSE, this results on near daily gaps which diminishes the volatility (opportunity) here.

From Wikipedia, the free encyclopedia
An American Depositary Receipt (ADR) is how the stock of most foreign companies trades in United States stock markets.

Depositary banks have numerous responsibilities to the holders of ADRs and to the non-U.S. company the ADRs represent. The largest depositary bank is The Bank of New York.

Individual shares of a foreign corporation represented by an ADR are called American Depositary Shares (ADS).