Technical analysis is not perfect. It is not enough to be able to identify head and shoulders, flags, triangles, shooting stars, dojis, etc. and be able to make money on a consistent basis. There is a lot of technical lingo that many traders take as gospel, “support broken, becomes resistance” is one such example. True, support broken often does become resistance and I often point it out on this blog when I see it. But many times the market will turn around and run back up through that resistance level, leaving traders without a position, or worse, short a market which is now surging higher. That is why our analysis cannot depend on mere recognition of patterns and formations. In order to truly succeed in mastering technical trading, we need to understand the motivations of the participants, we need to understand psychology. Let’s look at the current chart of the Nasdaq 100 (QQQQ). Since Monday I have been pointing out the breakdown through support at 41.70-41.80 and how that level has been acting as resistance. While the market is below this level it makes sense to be short down trending stocks and to have minimal long side exposure to Nasdaq stocks. But what if the market is able to surge back above the level we now see as resistance?

Today’s selling could be setting up a test of the Monday panic low, and if it is a successful test, the market could be poised to turn back higher again. Please do not misunderstand this as a market call, it is simply a possible scenario which we need to be ready for. Currently the short term trend is lower and as such there is little reason to be long the majority of stocks, but to me the selling doesn’t seem to be that severe which makes me think a turnaround is a possibility. If that is the case, it will pay to be ready for such a move. In fact, as traders we always have to be prepared for the unexpected which is why you should always have a list of potential long and short candidates, be prepared for anything the market gives you each day. Remember, the market loves to fool the majority of participants, so you must think different than the majority. Let’s try to understand the current psychology the charts are reflecting in the QQQQs. 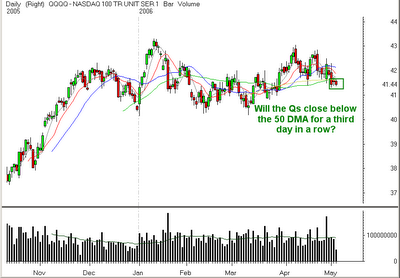 The daily chart of the QQQQ shows the market closed below the 50 day MA two days in a row, which has many technicians concerned. 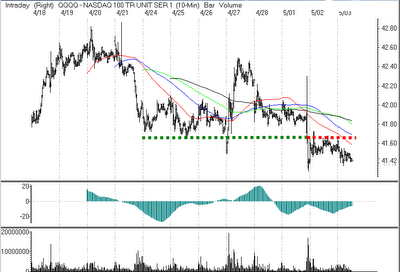 You’ve likely heard that during sell offs stock moves from “weak hands to strong hands” What that means is the sell offs force those with little conviction in what stocks they hold to sell quickly, many short term traders like myself fall into this category. I am a trader, I do not want to stick around when the selling starts; I would rather protect my equity and look for better opportunities where the trend is in my favor. The “strong hands” who buy on this weakness are people who have done fundamental research on the company and are happy to purchase more shares at a lower price. Which camp you fall into is based on your own personal psychology, but we need to understand the motivations of all participants to succeed on a cosistent basis. What about the “evil short sellers”? When prices break down, they realize they are in a position to induce further fear by offering stock out; sometimes just showing big size on the offer is enough to force further selling in weak stocks. Short term traders may also sell short hoping to capitalize on further weakness.

So how does this relate to the current market? Let’s think about what would happen if the market were to climb back above 41.80. If after sitting on the sidelines most of the day waiting to see how serious the selling in the market became, big buyers decided to aggressively buy towards the end of the day, they could really impact the market trend. By buying large quantities of stock and pushing prices rapidly higher, the short term short sellers would quickly repurchases their shorts, this adds further demand. The longer term shorts might move to the side and not offer out stock for fear of being run down by the momentum, this removes supply. As the market runs up towards 41.80, sidelines cash from the “weak holders” who sold earlier might re-enter the market (more demand). The problem is, who is going to meet all this demand by offering out supply? The “strong holders” are just that, strong holders, they are not likely to be willing to sell their stock for small gains, they will demand (and be able to get) higher prices at a point in the future (likely after upgrades and positive news comes). The combination of a removal of supply from weak holders and overconfident short sellers and the new and unforeseen source of strong demand could combine to not only push the market back up above the level now perceived as resistance, but it could spark a strong rally as shorts scramble to cover and fresh money enters from the sidelines. This phenomenon is known as a “bear trap” which essentially means the bearish sellers are trapped in unprofitable positions which they must cover to limit losses. Understanding this psychology is also the basis of the phrase “from false moves come fast moves” meaning a breakdown which fails to hold becomes the basis of a stronger move in the opposite direction.

Of course, none of this has happened and it may not, but if the Qs can make it back above 41.70-41.80 you should have a better understanding of the psychology driving prices higher. Again, this is not a market prediction, right now the market shows no signs of an imminent turnaround, this is simply a possible scenario laid out for educational purposes.