Yesterday’s impressive rally is finding some follow through action this morning as the perception of Fed policy has changed. The market now strongly believes that the next Fed meeting will mark the last time that interest rates will be raised in this cycle. As a result of this change in perception, stocks experienced heavy buying which was exaggerated by panicked short sellers who were caught leaning the wrong way. Prior to yesterday, short sellers’ confidence was bolstered by surging oil prices and interest rates. Oil prices are still in a strong uptrend as are interest rates, that has not changed and is not likely to change because of one day’s action. While the worrisome trends in interest rates and oil remain intact, shorts simply had to cover because sitting passively would result in growing losses, which is just prudent money management. Sharp and sudden moves like yesterday take a lot of participants by surprise and there is a tendency to chase prices, but the best course of action remains constant, trade based on what you see on the charts, not on the strong feeling the market can stir up when large moves are made. Emotionally driven trades often end in losses. It is best to focus on the trends of the individual stocks and remember that earnings releases are being released daily, know when the stocks you are trading are due to report. Let’s review some of those trends, update some stocks and look at new opportunities to make some money. 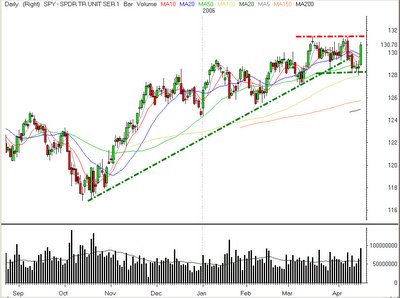 The chart of the S&P 500 (SPY) shows the market is rallying back towards the highs of the recent range near 131.45. 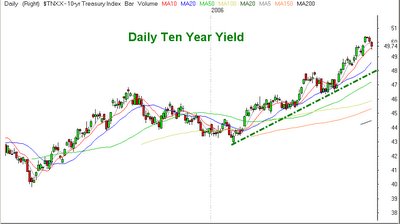 The 10 year yield chart remains in a solid uptrend, it may be due for some consolidation but there are no signs of reversal here.

TQNT– violated the suggested stop at 5.00 but now looks poised for upside once again.

ZP– failed to move past resistance, it may try to find support along the rising 20 day MA, but wait for strength before considering a purchase.

ALTI– violated the suggested stop, gains should have been locked in.

ACPW– finally made the move we were looking for as it took out resistance yesterday. 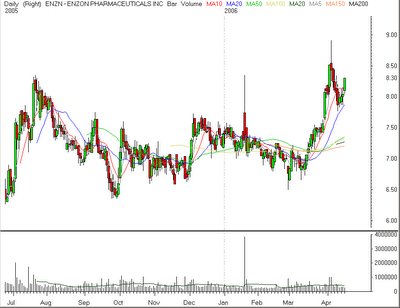 ENZN– is starting to move higher after the recent consolidation, stops should now be just under 8.00.

CTLM– continues to hold up well, moving past 4.35 should see a return of upward momentum, stops should be near 4.10. 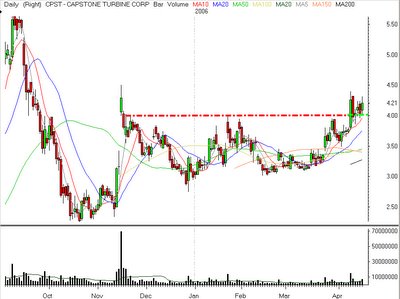 CPST– saving the best for last…buyers returned to CPST yesterday with volume and it now appears that taking out yesterdays high should lead to a continued move higher. Remember there is a large and losing short position in this stock, higher prices will uncover their “Uncle” point. This group is very strong; FCEL broke out, BLDP continues higher and that strength could bring buyers to CPST.