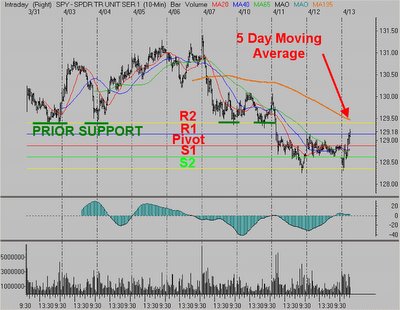 First, one of the most simple rules of technical analysis is that support once broken becomes resistance, while this is not law, there is a strong tendency for “trapped” longs to want to sell stocks at a breakeven level. This level should also be heavily defended by short sellers who want to continue to control the trend.

Second, the declining 5 day moving average will often act as an early level of resistance, it is found at 129.45 right now.

Third, is the location of the daily “R2” which often acts as resistance on an intraday basis.

Given the low volume nature of the rally today it makes sense to be careful as the market approaches this potentially strong level of resistance.

If somehow the market could rally above this level and stay up there on a strong volume rally it will have trapped the short sellers and will have others scrambling to get long, I only mention this because it could happen although I do not think it is very likely.