The Rams undefeated season is over, but they are still in great shape for the playoffs. They remain number one in their division and are likely to meet up with the Ravens again in 4 weeks at the “Turkey Bowl”. Final score today was 34-6, ouch! As is often the case, the final score did not tell the entire story. The Rams started out strong, scoring twice before the Ravens, but the TDs were called back due to penalties. I think this drained the kids emotionally? The first half ended with the Ravens up 14-6 and in the second half the Rams acted desperate. They threw 3 interceptions and fumbled twice, they fell apart. It was like seeing a newer trader experience a large draw down and add to the losing position on margin. Fortunately for these kids, they are young and probably learned a good lesson about feeling infallible, much like the share holders of MNCS! 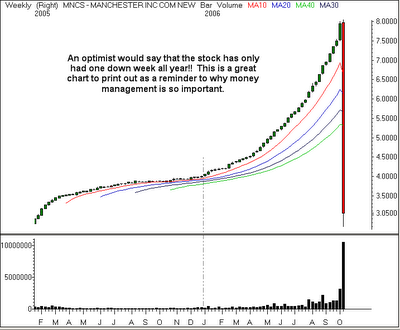